MSPCA-Angell Asks: Is this Your Rare, Beautiful Indian Ring-Necked Parakeet? Fruit Loop hangs out at the Boston adoption center, where she'll be placed for adoption should her owner not claim her (credit MSPCA-Angell)

BOSTON – Staffers at the MSPCA-Angell’s Boston Adoption Center in Jamaica Plain may soon place a stunning Parakeet—one so rare that no one knows if a similar bird has ever taken temporary refuge in the shelter before—into an adoptive home if an owner doesn’t step forward to claim her, the organization has announced.
The bird, an Indian Ring-Necked Parakeet, is believed to be a five-year-old female.  She is powder blue with a fine gray line around her neck.  As their name implies, Indian Ring-Necked Parakeets are native to India and are known to be willful birds that enjoy a great deal of time and attention from their keepers.
Staffers named the new addition “Fruit Loop,” in part because of her other-worldly coloring.  She was found as a stray in Quincy, Mass. before being taken to a local veterinary clinic by a good Samaritan.  She was then transferred to the MSPCA’s Boston adoption center on May 22nd.
According to Anna Rafferty-Foré, associate director of the MSPCA’s Boston adoption center, Fruit Loop appears to be in good health and would make an excellent companion for an experienced bird-keeper—if her owner does not step forward first.
“It’s possible that her previous owner does not know that she is with us so we want to do all we can to get word out to the community first, in case someone is looking for her,” she said.  “It’s been eight days since she arrived and we’re hoping that by going public with her story we can help identify her owner.  But if not we’ll go ahead and place her for adoption.”
Pets for Life
Indian Ringed Neck Parakeets—like many large birds—can live for more than thirty years.  And because they become very attached to their owners and families, the MSPCA seeks to place adoptable Parakeets with individuals committed to keeping them for the long haul.
“Taking home a Parakeet of any kind is a major life-time commitment and we want to ensure that if she’s adopted it’s to someone very familiar with bird behavior and who understands just how long large birds like Fruit Loop may live,” said Rafferty-Foré.
Indian Ringed Neck Parakeets are sensitive birds that require a lot of interactive play and time out of their cage to remain happy and well adjusted.  They thrive on balanced, nutritious diets that include pellets, fruit and vegetables, and are known to be quite talkative.  “Although she [Fruit Loop] has yet to talk to us,” joked Rafferty-Foré.
Rafferty-Foré encourages anyone who may know Fruit Loop’s previous owner to contact the adoption center at [email protected].  “We’ll do all we can to identify that person but if we cannot, we’re confident we can find a wonderful home for her.” said Rafferty-Foré. 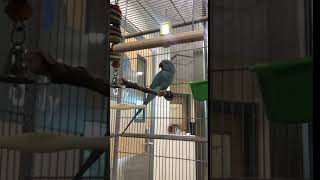